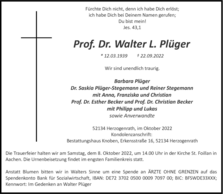 The Department of Earth Sciences and Geography mourns the death of Prof. Walter L. Plüger.

Walter Plüger was born in Heerlen on 12 March 1939. After his school years in Kerkrade from 1945 to 1957, he studied physics and chemistry at the Rijks-Universiteit in Utrecht until 1960. In 1961 and 1962 he completed his military service in the Royal Netherlands Army and began studying geology at the RWTH Aachen in the winter semester of 1962/63.

After completing his studies with the Diplom-Hauptprüfung in 1967, Walter Plüger became a research assistant and subsequently a scientific assistant in the Department of Applied Deposit Science at the Institute of Mineralogy and Deposit Science. He completed his doctoral thesis ("The potentiometric determination of fluoride and its application in the geochemical prospection of fluorspar deposits") in 1972.

As an academic councillor and senior councillor, he headed the Department of Applied Deposit Science for many years and was also responsible for the administrative procedures of the Institute of Mineralogy and Deposit Science under Professors G. Friedrich and M. Meyer. His scientific focus during this time was marine deposit research. In 1989, Walter Plüger submitted his habilitation thesis entitled "Die Manganknollenvorkommen des SW pazifischen Beckens". He was later appointed as an associate professor.

In the 1990s, he was instrumental in the conversion of the Department of Applied Deposit Science into the Laboratory of Geochemistry and Environmental Analysis, which he successfully headed until his retirement in 2002. Walter Plüger lived at his home in Herzogenrath until his death. He was married and had two daughters.