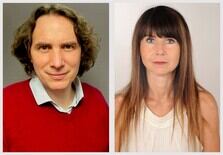 On Friday, February 12, 2021, the ABC/J steering group elected the future Geoverbund directorate. With Prof. Florian Wellmann as Professor for Computational Geoscience and Reservoir Engineering, and PD Silke Trömel as Lecturer for Meteorology, a top-class team now starts its challenging task for the ABC/J Geoverbund.

Prof. Florian Wellmann, new director of the Geoverbund ABC/J: “In the Geoverbund, we cover a wide range of current exciting research in the geosciences. I look forward to working with the universities and the research center to advance further joint research and teaching projects in the region.”

PD Silke Trömel, new deputy director of the Geoverbund ABC/J: "With the ECMWF's new location in Bonn, the Geoverbund is currently facing major new opportunities and challenges. I look forward to seizing and tackling these in our competent team."

Great thanks are due to Prof. Dr. Harry Vereecken. As a former director, he has served as a thought leader, course setter and key strategist for the Geoverbund for the past three terms. On behalf of everyone, we would like to thank him for his tireless and passionate commitment.

The Division of Geosciences and Geography congratulates Prof. Littke on his nomination among the TOP 20 German geoscientists in 2022.

In the research.com ranking, the publication data of 6,741 geoscientists was evaluated on the basis of the H-factor, the number of publications and citations as of 6 December 2021.

In addition to Prof. Littke (15th place), Prof. Urai (33rd place) and Dr. Krooß (93rd place) are also among the top 100 German geoscientists with the most publications.

The ranking can be viewed here.